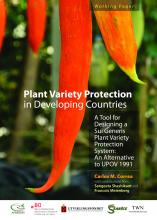 French. Printed copies can be ordered at no cost: contact@apbrebes.org

A new tool to assist developing countries in designing a “custom made” plant variety protection suitable for the seed and agricultural systems that prevail in developing countries has been published by an international group of NGOs.   It was presented on the occasion of the Sixth Meeting of the Governing Body of the International Treaty on Plant Genetic Resources for Food and Agriculture in Rome, 5-9 October 2015.

Members of the World Trade Organization with the exception of least developed countries are required to make available some form of intellectual property protection for plant varieties. They have ample flexibility to design a sui generis (unique) system that is appropriate for their agricultural systems.

The 1991 Act of the International Convention for the Protection of New Varieties of Plants (UPOV 1991) offers a rigid model inappropriate for developing countries. It ignores the characteristics of the seed supply systems in those countries, where farmers produce a large part of the seeds and other propagating material, and limits farmers’ traditional practices of saving, exchanging and selling plant materials. These activities are crucial to preserving a diversified supply of seeds, adapted to local conditions and a changing environment as well as support farmers’ livelihoods.

UPOV 1991 requirements also undermine implementation of the International Treaty on Plant Genetic Resources for Food and Agriculture (ITPGRFA), the Convention on Biological Diversity (CBD) and its Nagoya Protocol on Access and Benefit Sharing.

Therefore the purpose of this tool is to present an alternative to UPOV 1991 taking into account the needs and realities of farmers in developing countries as well as alternative sui generis plant variety protection systems that exist in some developing countries. This tool is to support policy makers, civil society organisations and farmer organizations engaged in the development of a plant variety protection system.

Chapter 1 examines the origins of plant variety protection through intellectual property rights and UPOV. Chapter 2 elaborates on the requirements of the Trade-related Aspects of Intellectual Property Rights Agreement administered by the World Trade Organization (WTO) that has flexibilities available to WTO members as well as the context and provisions of other international instruments relevant to plant genetic resources. These currently include the CBD, its Nagoya Protocol and the ITPGRFA. Chapter 3 discusses the key features of UPOV 1991 and its implications for developing countries.

Chapter 4 proposes model provisions for key features that are essential to designing a sui generis plant variety protection regime and these may be adapted to national circumstances.  Chapter 5 addresses the obstacles that developing countries may face in designing sui generis plant variety protection legislation, arguments against and in favour of non-UPOV- type of sui generis regimes, and recommendations for actions to be taken when developing a national law.

The tool is available   in English, in Spanish and in French.

For more information or for a hardcopy of the publication please contact:

Private nurseries and breeders from the United States pioneered the legislative movement towards the creation of exclusive rights over plant varieties. They were able to obtain, without the participation of farmers and consumers, the enactment of special legal regimes of plant variety protection (PVP). In Europe, commercial breeders' initiatives led to the adoption of the International Convention for the Protection of New Varieties of Plants (UPOV), conceived for the agricultural systems and the modalities of seed production prevailing in those countries. Developing countries were conspicuously absent in the process of creation and strengthening, through UPOV as revised in 1991 (UPOV 1991), of this international regime.

As a matter of principle, countries should be able to choose whether or not to provide intellectual property protection to plant varieties as well as what form of intellectual property protection they confer, depending on the characteristics of their agriculture and seed supply systems. Improvements in plant genetic resources for food and agriculture have taken place over the centuries without such protection. The costs generated by such protection may exceed potential benefits, particularly if farmers are prevented from pursuing their traditional practices of saving, using, exchanging and selling seeds/propagating material.

World Trade Organization (WTO) member states bound by the Agreement on Trade-Related Aspects of Intellectual Property Rights (TRIPS) need to provide some form of intellectual property protection for plant varieties. This obligation is crafted in such a manner that significant flexibility exists to design the legal regime for such protection. Importantly, least developed countries (LDCs), even if members of the WTO, enjoy full policy space to not provide any intellectual property protection for plant varieties.

Some countries have opted for joining UPOV 1991 in order to comply with the obligation created by the TRIPS Agreement; many of these countries have done so in response to pressures from developed countries or obligations imposed in free trade agreements (FTAs). However, UPOV 1991 which significantly expanded and strengthened plant breeders' rights, offers a rigid model inappropriate for developing countries. It ignores the characteristics of the seed supply systems in those countries, where farmers produce a large part of the seeds/propagating material used, and suppresses farmers' traditional practices of saving, exchanging and selling plant materials. In developing countries access to seeds/propagating material is heavily dependent on practices of saving and exchanging seeds/propagating material. Selling of seeds/ propagating material is an important source of income for farmers and their families. These activities are crucial to preserving a diversified supply of seeds, adapted to local conditions and a changing environment. UPOV 1991 also does not include measures to prevent the misappropriation of farmers' varieties by commercial firms. In addition, the implementation of UPOV may narrow down the genetic diversity in the fields.

Countries, even those that are WTO members, are not obliged to join UPOV nor to otherwise apply the standards set out by the UPOV Convention. For the purpose of conforming to the commitments made under the TRIPS Agreement, they can implement other sui generis options which are more suitable to their needs and supportive of small-scale farmers who account for the largest part of food production and employment in many developing countries and of national policies on agricultural development and food security.

While UPOV provides a model of protection focused on breeders' commercial interests, the Convention on Biological Diversity (CBD) and its Nagoya Protocol on Access to Genetic Resources and the Fair and Equitable Sharing of Benefits Arising from Their Utilization, as well as the International Treaty on Plant Genetic Resources for Food and Agriculture (ITPGRFA), include elements reflecting other interests, notably the conservation of biodiversity, the sustainable use of genetic resources, and the fair and equitable sharing of the benefits arising from their exploitation. Since PVP legislation concerns exploitation of plant genetic resources, a sui generis regime on plant varieties should be designed in a manner that is supportive of and coherent with the objectives and elements of these international instruments.

Developing countries are often exposed to arguments about the potential benefits of joining UPOV 1991. In addition to the mentioned pressures and obligations under FTAs, these countries have been constrained by limited expertise, institutional capacity and experience in designing regimes adequate to their realities. However, based on an inclusive process of continual engagement with relevant stakeholders, including farmers, parliamentarians and government agencies, such regimes can be developed and implemented.

This working paper offers a tool to design an alternative to a UPOV-type regime of PVP, one that is suitable to the seed supply and agricultural systems prevailing in developing countries. The proposed sui generis regime is articulated on the basis of three categories of plant varieties: (i) 'new uniform plant varieties'; (ii) 'new farmer and other heterogeneous varieties'; and (iii) 'traditional farmers' varieties'.

In the proposed model provisions, new uniform plant varieties are subject to a regime close to UPOV 1978, whereunder the NDUS (novelty, distinctness, uniformity and stability) requirements for the granting of breeders' rights are applicable and on registration, breeders obtain an exclusive right. This means commercial use of the propagating material of the new uniform plant variety would require prior authorization of the right holder, subject to certain exceptions.

New farmer and other heterogeneous varieties should also be registered but different requirements would apply (novelty, distinctness and identifiability). Right holders would have a remuneration right only (not 'exclusive rights'), that is, the proposed regime would not restrict commercial exploitation of the propagating materials of these varieties; however, it will require payment of remuneration (to individual farmers, farming communities or breeders that registered that variety) when such exploitation takes place. Thus, the regime essentially aims at preventing the misappropriation of varieties developed or evolved by farmers and farmers' communities, as well as of other heterogeneous varieties developed by breeders, including in public research institutions.

Commercial exploitation of the propagating material of traditional farmers' varieties would also give rise to a right to remuneration, but payable to a Seed Fund. The only requirement for this right to arise would be 'identifiability' of a variety; registration would not be needed.

Importantly, in recognition of the crucial role that small farmers play in the production of food in developing countries, the proposed sui generis regime exempts them from any obligation in connection with the categories of plant varieties mentioned, thereby fully safeguarding the right of small-scale farmers to freely save, use, exchange and sell seeds/propagating material. Other exceptions, consistent with the concept of Farmers' Rights, are also contemplated for other farmers.

The proposed sui generis regime also suggests the establishment of a Seed Fund which will collect remuneration from the commercial exploitation of traditional farmers' varieties and a benefit-sharing contribution when a new uniform plant variety is registered. Income from the Seed Fund will be used to support the conservation and sustainable use of plant genetic resources, particularly on-farm conservation and community seed banks, as well as to implement benefit sharing for relevant farmers and farming communities.

The proposed sui generis regime is an attempt to, inter alia, attain a right balance between breeders' rights and those of farmers and the society at large; ensure that farmers' varieties and those developed by public research and breeding institutions are not misappropriated; allow breeders to recoup their investments in the development of new varieties; expand the use of new varieties suitable to the conditions in the country, taking into account particularly the needs of small-scale farmers; support national policies of conservation and sustainable use of plant biodiversity for food and agriculture, as well as compliance with obligations under the CBD, the Nagoya Protocol and the ITPGRFA; preserve associated traditional knowledge and ensure the permanent adaptation of seeds to the evolution of agricultural ecosystems and food security; and respect, protect and fulfil human rights obligations.